Cross-platform DevOps with Visual Studio events in Wellington and Auckland

Are your development teams truly as effective as they could be?

So with this context, Equinox IT together with Microsoft New Zealand last week ran two free one-day events entitled ‘Application innovation day – Cross-platform DevOps with Visual Studio’. One event took place in Wellington and the other in Auckland and both events were well attended.

Equinox IT is New Zealand’s only Microsoft Gold Partner for the Application Lifecycle Management competency.

In this post I summarise the material that was presented during both events.

During the first session ‘Cross-platform application development with Visual Studio’ Microsoft’s Hannes Nel presented and demonstrated the significant changes that have been made in recent years to make Visual Studio more open and relevant to any development team regardless of development language or technology platform. In other words, Visual Studio has moved away from being a .Net development team facility to become ‘everything you need to build and deploy your app on any platform’.

Microsoft’s Joe Newton discussed the inefficiencies of having development, IT operations and the business all in different silos with walls in between. He painted the picture of how we should be breaking down those walls, working collaboratively and shipping frequently with minimum friction. Joe presented a model for DevOps, as shown below, with the development stages of plan and develop + test along with the production stages of release and monitor + learn. He then stepped through this model to show how each stage was supported within Visual Studio. 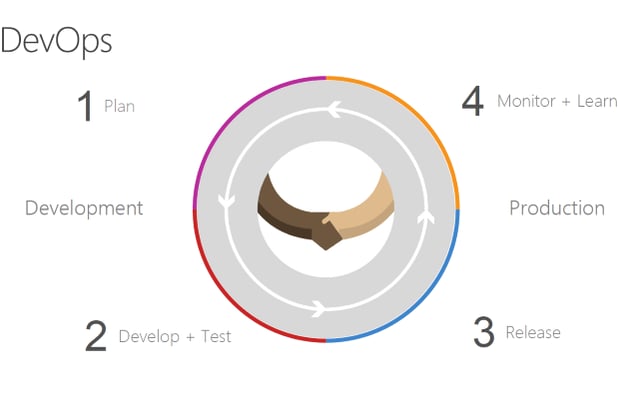 Microsoft Azure: Dev and test in the cloud

Anthony Borton of Enhance ALM was the MC for the day and also presented an hour and a half long series of demonstrations on using Visual Studio for DevOps. Based in Brisbane, but spending half of his time in Redmond, Anthony is a Microsoft Visual Studio and Development Technologies MVP. In addition, he is also a training partner with Equinox IT for Visual Studio training.

During his demonstration, Anthony reused the same DevOps model as shown by Joe (see image above), for demonstrating the Visual Studio facilities for planning, developing and testing, releasing, and monitoring and learning. In the process, Anthony made distinctions between the features available to those using Visual Studio Team Services online and those using Team Foundation Server in-house.

A notable observation from all of the Visual Studio demonstrations was that while there is a large community of development teams using Visual Studio, most teams are not using the tool to its full potential.

Applied case study: Evolving from Agile to ATDD to DevOps

A team from Equinox IT including Ray Cooke, Ashley Stewart and Ben Hughes then presented on our experiences of evolving from Agile software development, adopting ATDD and the transition to DevOps. Ray set the scene from a management and governance perspective, showing the different organisational and team structures that apply to traditional, Agile and DevOps approaches. Ashley spoke about the cultural changes associated with moving between the approaches, and the need for the right type of people who have both depth of expertise and breadth of expertise (the T model) when working in cross-functional Agile and DevOps teams. Ben then spoke about the ‘how’ of applying the methodologies. He presented on the Agile process, Kanban, our experience with specification by example (ATDD), and continuous delivery. Looking to the future Ray also explored how distributed IT may look in the future, with DevOps happening within individual business units and potentially not within the IT department.

Equinox IT and Microsoft New Zealand plan to run future Application innovation day events, to further explore the topics of Agile, DevOps and Visual Studio. At Equinox IT we have a core value that ‘knowledge exists to be shared’, and the purpose of these future events will be to share expertise and learnings to grow the capability of our IT community.