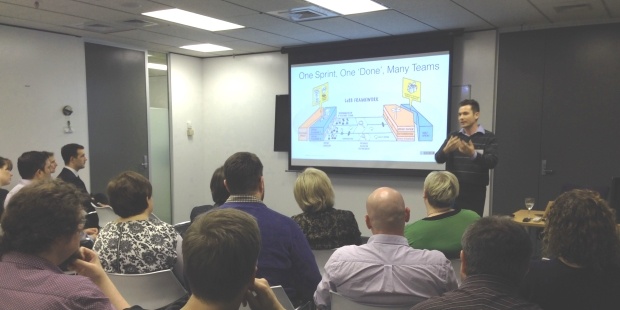 It was a pleasure to have Rowan Bunning, our Sydney-based Certified Scrum Training partner from Scrum WithStyle, over working with Equinox IT recently. During his visit, in addition to his regular Scrum certification training, Rowan also delivered a couple of client events and a webinar with us on the topic of Large-Scale Scrum (LeSS). Earlier this year Rowan became a Certified Large-Scale Scrum Practitioner.

While he was here I took the opportunity to interview Rowan to find out more about LeSS for scaling Agile development.

Brendon: What is Large-Scale Scrum?

Rowan: Large-Scale Scrum or LeSS, as it's often called, is Scrum in the large. It's Scrum with multiple teams working on the same product or the same business solution, that we normally might use programmes of work to deliver.

It takes Scrum patterns and builds on top of that additional patterns that help multiple teams achieve large outcomes. It's based on 10 plus years of experiments in large organisations doing large-scale product development and multi-site development.

In LeSS we see scaling patterns that have actually been around in the Scrum community for many years. A single sprint cadence for multiple teams, concurrent sprint planning, single product-wide definition of done and single whole-of-product sprint review are all incorporated within LeSS. LeSS goes beyond ‘big room planning’ by applying the big room technique to backlog refinement every sprint. This is one of a number of mechanisms in LeSS that enable collaboration across teams on high-level solution design and it thus addresses architectural alignment at scale.

Craig Larman and Bas Vodde have really been the ones who formulated LeSS as we know it, based on all of this learning over the last 10 years, incorporating a lot of experiences, both for them personally and in the broader Scrum community. The Scrum community in general has been exploring Agile scaling for quite a lot of years. Something that I experienced in 2008 on a large product development project and at that time I was reading about Scrum of Scrums and big-room planning and a lot of these concepts prior to LeSS. These things have been around much longer than some of the more recent frameworks like SAFe.

Brendon: In what circumstances would you use a Large-Scale Scrum?

Rowan: It's really relevant for anything more than one team, say, 2 teams plus. So we're generally talking about 10 or more people on the same effort whether that be a single deliverable product or a single customer facing product that you're looking to optimise in terms of its value for the end customers. LeSS can be used from two teams right up to hundreds of teams and thousands of people. For example, there are 2,500 people working together on a single product using LeSS these days. It is being used with that many people.

In my view LeSS can be very insightful for people just doing single team Scrum too. Craig and Bas have chosen to be more explicit about how Scrum should be applied than perhaps even the Scrum Guide and a lot of other popular Scrum sources. So, there's quite a lot of specific guidance in LeSS that I think adds value even for one single team Scrum.

Brendon: What are some of the main benefits that you've seen from Large-Scale Scrum?

Rowan: The ability to streamline the design of organisations that are trying to maintain a capability of rapid responsiveness. This is the sort of capability they might have had as a startup or when the organisation was smaller. Now however, they're a larger organisation, and have a lot more organisational complexity, a lot more layers and processes, and perhaps a lot more to deal with. LeSS provides them with a very nice, simple set of patterns for really streamlining that and coming to what you might think of as a more lean organisational structure. Examples include feature teams who can actually focus on a particular value adding feature end-to-end, without dependencies on other teams.

Brendon: The product owner role can be a little different on Large-Scale Scrum I understand?

Rowan: Many believe that Scrum only scales horizontally, not vertically, and that's the belief of Dean Leffingwell (formulator of SAFe), I believe. He's said this multiple times. However LeSS proves otherwise, that it actually scales vertically when you take the product owner role as more of a big picture role than single team product owner, which is where some of the different variances of Scrum as practised by different organisations diverge.

The latter is really the direction that LeSS takes. It's also the direction that the consultancy I worked with in the UK followed, for instance. I believe this is a very powerful model that really goes to the essence of owning the product and optimising the whole. This helps organisations make commercial decisions with the right balance for the overall product, and that's a very important function in any sort of product development or solution development. The whole product focus and single product owner rule in LeSS avoids the product formulation being a function of politics between stakeholders and subject to the alignment issues and lack of business agility that we often experience with committees.

Brendon: How widely is Large-Scale Scrum being used?

Rowan: I think it's more widespread than people might be aware of, because many of the patterns in LeSS are the same patterns that have been used for some time in scaling Scrum before it had the LeSS name. LeSS adds some more specific roles and specific concepts to this and makes it a little bit more structured and clearer for people to adopt.

A lot of the patterns in LeSS have been used in Europe and the US for many years. There are a number of case studies and books about some of these scaling patterns including the specific experiences of Bas and Craig as the authors of the LeSS framework. Much of their work has been in Asia, particularly China, Singapore, and India, and so actually relatively local to this part of the world.

There are case studies popping up frequently now and many of these can be found on the less.works website. We've got case studies from not just the big telcos such as Nokia Networks and Ericsson but also Bank of America, Merrill Lynch, JP Morgan Chase and Port of Rotterdam in Europe. Someone I know did a case study on a telecom company in Australia. I've had a few experiences of using LeSS in Australia as well.

When you look at Europe and Asia and North America, there's some case studies of hundreds, if not thousands of people, doing their work using LeSS every day.

Brendon: It feels to me like Large-Scale Scrum is not widely known or used in New Zealand, would that be your impression?

Rowan: Scaling Agile is certainly happening in New Zealand, but perhaps the LeSS name is not widely used. Broadly speaking, I think organisations have gone down one of two routes with how they scale Agile projects. One route is taking what works in the small Scrum as we know it, and seeking to use those same patterns as you go to the large, and that's really what LeSS represents.

Another way organisations have gone is to view Scrum as something that needs to be wrapped within another management approach, often a programme of work or a portfolio. In this way management look at Scrum as something that teams do, but use another approach to manage the programme. SAFe is an example of that sort of approach, and they're quite different ways of approaching scaling Agile.

So I think organisations that have grown more organically, when they’ve started up with one Scrum team, and their product has become successful then they've added another and another. This has happened fairly intuitively in a lot of cases and they have grown in the direction of a LeSS approach. I've seen this in a few companies in Australia.

However, organisations who have a very strong programme approach, and large programmes of work, then they've often adopted Agile more as a development or delivery technique. In this case Agile development is often framed within a programme of work and people tend to look at an approach more like SAFe. This is not as transformational for organisations when compared to those who look to take a consistent Agile approach to the bigger level of concern and not constrain it within something that, perhaps, isn't designed to be quite as Agile.

Brendon: How adaptable is Large-Scale Scrum to fit in with organisations’ ways of working?

Brendon: Where do you suggest organisations should start if they were looking to adopt Large-Scale Scrum?

There's also the webinar that we recorded last week: Overcome common Agile problems using Large-Scale Scrum (LeSS). That webinar is really looking at what problems LeSS is seeking to help organisations solve, and I think that's a big differentiator with these different scaling frameworks. Not all of them are trying to solve the same problems. I think there's different levels of assumption about what should actually be changed, or perhaps improved versus what stays the same and what parts of the organisation are actually going to adopt Agile approaches.

There's two books already out that are very aligned with LeSS which are the books by Craig Larman and Bas Vodde:

These books are very in-depth and very lengthy. They're very good for people who've got some Agile experience and would like to take their understanding to the next level.

There's a new book coming out hopefully this year by Craig and Bas, that's specifically the LeSS framework, and will be an easier read for most people starting out with LeSS and Scrum beyond one team:

I've been reviewing the chapters as they've been coming through and it looks really good. There's very good guidance in it, not just for multi-team Scrum, but even single-team Scrum, just to really understand how to best set up teams and how to best focus the product overall. A lot of how to do good Scrum essentially.