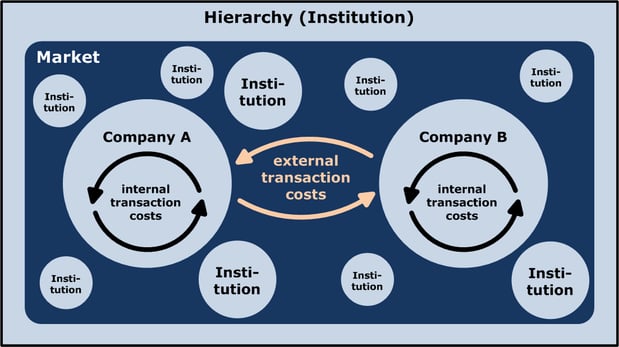 In this article I want to show you how digital disruption is changing the dynamics of organisations. To make my point I first need to take you through a little bit of economic theory, so that we can explore why firms exist in the first place and how digital disruption might change the economics and structure of the firm.

The Nobel-prize winning economist, Ronald Coase, analysed why an entrepreneur would hire employees in the first place rather than contract with the open market. Coase postulated that firms exist because they are able to maintain lower transaction costs for the development of products and services than the costs for an entrepreneur to contract multiple individuals in the market. Basically firms exist where it is cheaper to develop products and services internally.

Simplifying that down even further, firms existed and grew because they could perform things like production, warehousing, sales and marketing, inventory management, delivery etc at a lower cost internally than externally.

Constraints like geography, logistical efficiency, product development and payment processing were more cost effectively managed within the firm and the same was true of market competitors. Optimisation, process improvement and systems automation were applied to stay ahead of the competition, resulting in growing sophistication of internal systems and increased internal IT capability.

So what has this got to do with digital disruption?

Well, historically, due to technology constraints (networks, servers, desktops etc) work could only be achieved inside the boundaries of the firm (or the data centre). The model could not be disintermediated by the market as every other firm was working with the same constraints.

Customers also lived with those constraints, they were dependent on what the firm told them about their products and services, they needed to visit the shop or store to educate themselves and physical word of mouth had no viral capability.

The impact of digital technology is that now the market can disintermediate the firm, and consumers can sever their dependency on the traditional firm. The parochial information hoarding of the firm is out and peer-to-peer information sharing is in. Traditional middlemen firms are shrinking and retrenching, and newer, leaner middlemen are appearing who are using external market capability, way less internal resource, and direct customer involvement to match and beat traditional firms.

The rise of 'sharing economy companies' and unicorns

The pace of digital change is so rapid that market commentators are inventing new terms to describe the major success stories in the sharing econony.  Unicorn is a term coined by seed investor Aileen Lee to describe privately owned startup companies with $1billion plus valuations.  Sharing economy unicorns include Uber (sharing alternative to using a Taxi firm), and AirBnB (sharing alternative to using a hotel).  When Ms Lee coined the term in 2013, she identified 39 members of the 'Unicorn Club'.  Now, according to the Wall Street Journal, there are 125 unicorns and counting.

Closer to home TradeMe, though not a unicorn, has leveraged it's digital platform to provide an alternative to using a retail store, recruitment agent, or real estate agent, and the NZ Herald also recently compared and contrasted Xero to these unicorns.

Regardless of these categorisations the reality is the these newer, leaner digital middlemen use digitisation to cut across traditional organisation and firm boundaries and facilitate sharing and collaboration between external market participants in ways that are deeply disruptive to traditional business models.

Food for thought? – absolutely, and in the next article I’ll be looking at some more specific examples of digital disruption that offer new firms opportunities to enter the market, or that give traditional firms the opportunity to compete differently, to re-envision their products or to re-engage their customers.

Mark Smith is an Equinox IT Principal Consultant based in our Auckland Office who specialises in digital strategy and IT architecture.