Understanding the options for the next generation enterprise

Dr. Peter Weill, addressing Equinox IT consultants in August, talked about his research into Options for Next Generation Enterprise.

Dr. Weill is Chairman and Senior Research Scientist for the MIT Sloan Center for Information Systems Research (CISR). He was in Wellington as a guest of Equinox IT and spoke with government, Wellington City Council, and business leaders about CISR's research into why enterprises will need to be either drivers or participants in several digital ecosystems, and a driver in at least one to survive.

He discussed CISR’s research methodologies and said creating the framework for researchingOptions for the Next Generation Enterprise had been extremely difficult.

“We do a lot of interviews and research to come up with the dimensions we think will be important in predicting the future of business. The dimension that took us by surprise (and in hindsight shouldn’t have) was the value in knowing your end consumer. More specifically, we believe knowing your customer’s goals makes a key difference,” said Dr. Weill. 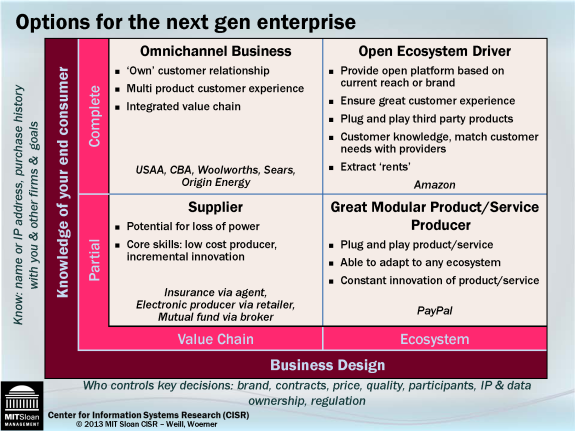 “CISR’s research indicated that when margins are low, organisations become under pressure and seek to move out of their quadrant.

“Most companies who are multi-channel are trying (and this is a big, difficult change) to become omnichannel businesses offering a multi-product client experience.

“Our research shows organisations in the Supplier quadrant wanting to move up, and businesses currently in the Omnichannel Business quadrant seeking to move right towards an Open Ecosystem Driver. Huge investments are now being made to move within these axes.

“The exception is an organisation such as PayPal which has determined to be the best in the world at one thing, and plug-and-play in anyone else’s’ ecosystem,” said Dr. Weill.

Assessing the options
One way you can measure your options is to bring the Voice of the Customer inside your company said Dr Weill.

He referenced the USA Net Promoter Score (NPS) 2013 benchmarking survey which noted the average Financial Services industry ranking for banks was 29%. In other words 29% of customers would net promote their bank to their friends. The United States Automobile Association (USAA) ranked first in this category with 78% in the 2013 survey. Significantly USAA also led the Select Insurance sector with an 80% approval ranking for their home content insurance.

Amazon was by far the highest-ranking organisation in the Online Services sector with a NPS ranking of 69% outstripped bricks and mortar retailers.

An Australasian context
Dr. Weill said that Coles, the supermarket chain, is now one of the larger insurance players in Australia.

“They’ve added insurance to their customer experience and the relationship they already have with you.”

"Wesfarmers is now a diversified mining, energy, retail, insurance and agricultural corporation that has successfully expanded its insurance business through the relationships customers have with Coles," said Dr. Weill.