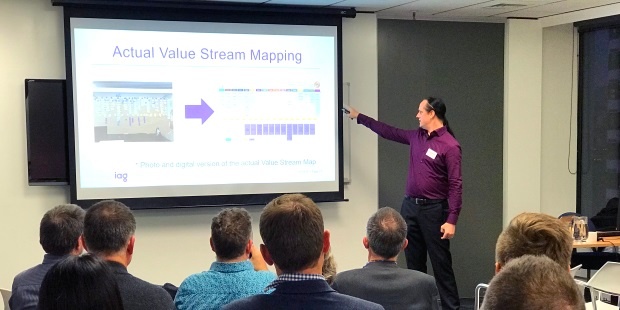 Shane Ross introduced Daniel Scott-Raynsford of IAG New Zealand at our client event a couple of weeks ago, and in the process he provided some context on why we approached IAG to speak. Many examples of successful DevOps, Agile and Cloud adoption focus on start-up and high-growth companies who are able to bake in these approaches from the start, unencumbered by legacy technology, strict regulatory controls and deep-rooted structures and ways of working.

IAG New Zealand, as the country's largest insurance provider, has been through a 12 month journey to implement services in the Cloud and adopt DevOps and Agile approaches. In an industry that is facing disruption they made the decision to disrupt themselves first.

As a large, complex and established company, they have begun a journey to transform to different models and modern ways of working. Daniel is IAG New Zealand's Continuous Delivery Practice Lead. It was a pleasure to host him and have him speak to our clients about IAG's journey and the lessons they learned through the process.

IAG New Zealand has 47% of the New Zealand insurance market and runs some of our country's leading insurance brands such as AMI, State and NZI. The company has 4,000 employees in New Zealand.

The insurance industry faces disruption, not only from competitive activity, but also from the impact that society changes have on insurance. For example, what are the implications around insuring self-driving cars or car sharing models?

IAG New Zealand has grown through acquisition and as such has a lot of different core and legacy systems, many of which are tightly coupled. This complexity introduces cost and risk, but also makes it more difficult for IAG to respond to disruption.

IAG decided that to respond to disruption they needed to 'Be Agile'.

While the transformation centered around IAG's journey to the cloud, the scope of change focused on a wider set of principles, including:

Daniel spoke about their adoption of 'the other Moore's law' - "build what differentiates you, buy what doesn't". He also showed how they used value stream mapping to get value to the customer through their process, with a focus on identifying bottlenecks and risks and minimising waste and handoffs. 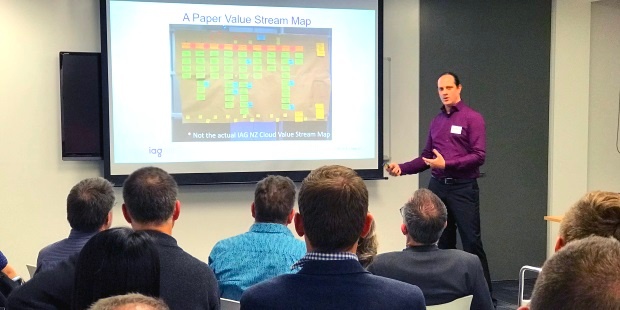 Starting with an experiment and ramping up

IAG New Zealand began their journey with an experiment by selecting a small, internally facing project and developing a cloud native application. They kept the delivery pipeline simple, with limited automation and not too many controls. They learned a huge amount that they rolled into their following activities.

The transformation is not complete yet, with more teams expected to transition into cloud development and DevOps and Agile approaches. Daniel's team is looking at the lessons learned and re-embedding the ways of working to continuously improve.

Daniel indicated there were many more lessons learned, but in the interests of time had just included some key ones.

It was fascinating to hear Daniel speak about their journey, how they approached the transformation and the lessons they learned along the way. The presentation was well received by those attending with a good number of questions and follow-on discussion about:

We're very grateful to IAG New Zealand and to Daniel Scott-Raynsford for sharing this journey and lessons learned with Equinox IT and our clients. Thank you.